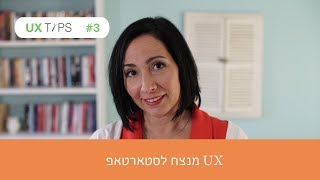 3 UX questions each entrepreneur should ask 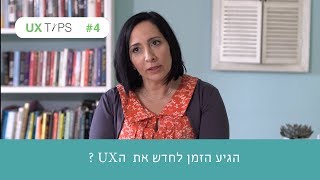 Is it time for a UX redesign?

5 reasons why startups’ UX is better

5 reasons why startups’ UX is better

What are the secrets that make startups UX better? What are the strengths that enable startups to out compete a more established product? During the past few years I’ve worked with numerous startups, designing their User Experience. I guess you all know the “why startups fail” articles. This is a different article; we all know startups deal with many obstacles, however, I actually believe startups hold great advantages over bigger companies and we should harness them in the UX process.

(The video contains both Hebrew and English subtitles)

When my first born, Tamar, was about 6, I consulted many professionals, hoping they could tell me what was is the reason for her difficulties and how can we fix it. They easily diagnosed her as having Learning disabilities. None of these professionals ever performed any assessments that would discover and measure her strengths. None of them even mentioned the potential of her capabilities and powers.

To me, focusing on strengths makes so much more sense. It moves things along, it makes it more pleasant and it’s like when you go to the gym — you can struggle to work out muscles that are weak — or choose to work on muscles that are strong and they will automatically start to strengthen the weak parts!And it’s not only me, researchers prove that focusing on your strength will get you much better results than trying to repair your weaknesses.

So how does this relate to startups and UX? Well, a lot of people think the UX is about users, analysis, problem solving, putting out fires, etc, which it is often — but what about looking at existing assets in a company and leaning on these strengths to make the UX better? Startups actually deal with this all the time.

When you look at it this way, it seems impossible that a startup could ever out-compete an established product.

I’m proposing a different way to look at things — I feel that startups actually hold a number of great advantages over bigger companies and we should harness them in the UX process.

What’s common between Instagram, Dropbox, Trello, and Airbnb? They all do just one thing & do it damn well!

It’s like the old Chinese saying- “If you chase two rabbits, you catch none.” (Confucius)

The fact that a startup does not have time and resources to develop less important features or to address several personas needs make their product UX better. Focus on a single or a small number of capabilities- Only on what’s needed and essential for a specific user type (or persona) is one of the main points that make startups products UX better.

I guess most of you know Trello, the simple project management tool, right? So Joel Spolsky, the co-founder of Trello was part of the Microsoft Excel team before he started his own company. During customer visits in 1993, he found most users do not use what they thought is the main feature in excel- calculations. Most of them used it just to create tables. This insight was the first time Trello’s concept was created in his mind. Trello is taking the sticky notes board metaphor to the next level and flattening everything to a basic notes and comment- lists instead of the past project management complex tools with gantts, charts and reference documents- This exact focus is the secret to Trello’s success.

When the UX is focused on the most important capabilities the application is simpler and more user friendly.

Startups have young fresh products. It’s like a new baby — it’s a lot of work but the possibilities are endless! Most of their competitors have older products, built years ago, with older technology and for past user’s needs.

In today’s fast changing market products built a few years ago are considered out of date and their UI is old fashioned. Older companies are obliged to past versions, current features and current users. They are forced to keep their company and products the same to while keeping in mind the interest of the board of directors, the investors, their team and their customer base. They can only fix the margins of the product and in most cases the process has many limitations.

A great example of a startup who disrupted an old industry with a fresh new concept would be Uber- the shared ride application. Uber has de-monopolized the taxi cab service and reinvented it in every way. Uber is a problem solver for riders- They provide a ride for those individuals who need taxi cab services at reasonable prices and with a great friendly and quality experience. They have also made the experience more user oriented in that they allow the customer to track their vehicle as it is in route to them, they can rate the drivers & pay with their credit cards from the inside of the vehicle. Not only that- Uber drivers are also benefiting. Uber is creating jobs for people who wish to work full or partial time in order to earn more money without spliting their earning with a cab station company- this is essential in today’s complex financial state. Uber keeps on reinventing their service Uber and experimented in several areas to include Uber ice cream services, bbq, and roses for valentine’s day. As a result, the business has exponential growth potential, as investors are racing to them to get a piece of the pie.

Building a new product from scratch enables startups to build it better, using cutting edge technology based on UX foundation and structure while answering the need of current days market and users.

Corporate employees are aimed at thinking traditionally and to follow the organization’s culture- they are seldom encouraged being creative or innovative and even if they do try to innovate they will encounter numerous obstacles on the way, though more and more companies are realizing that they need to harness their employee’s creativity in order to succeed.

Startup employees are requested to work in a fast changing environment while being creative thinkers. They are always up to date. Creativity is a Mental characteristic that allows a person to think outside of the box, which results in innovative or different approaches to a particular task- The unique values and culture of startups encourage just that.

For example, Snapchat’s product works differently from everything that came before it. Private messages self-destruct after they’re read. Users film and watch videos vertically, not horizontally. Publishers and brands are lined up around the block to give Snapchat their content, which won’t even drive traffic back to their own website . Unlike, say, Facebook, which knows as much about you as some of your closest friends, Snapchat doesn’t ask you to tell it everything about yourself, and it doesn’t follow you around the internet to collect your data. As a result, it’s not targeting you with personal ads.

Snapchat’s UI has a very low affordance and it does not aim to ease of use. Actually, Snapchat favors fun and exploration over functionality.

Snapchat strengths of novelty and creativity lead them to a $10–20 billion estimated value and they have over 100 million monthly active users.

Startups are able to build better experiences since they encourage creativity and they don’t have the organizational politics obstacles.

Successful startups know that one good project can take months or years of tinkering and trial and error. Startups know that the process and effort are just as important as the result. As Thomas Edison said on his path to inventing the lightbulb, “I have not failed. I’ve just found 10,000 ways that won’t work.” That’s the startup mentality cultivating innovation.

Back in 2008 a company called Tiny Speck, had made a few mistakes. Founder Stewart Butterfield, who also co-founded Flickr, tell they failed at building a Flash-based online multiplayer game called Glitch, which developers around the US worked on for close to four years. At some point, the team became less interested in Glitch and more interested in IRC, the ’80s era communication tool and they pivoted into just the messaging element of the product- this is how the company we now know as Slack, the highly popular instant messaging tool for business came about and became the Fastest Growing B2B SaaS Business ever and they are currently estimated in 2.8 billion USD.

Working in a trial and error mode enables the UX process to be more flexible and open minded. The fact that we have open questions and we know we are prone to make mistakes and learn from them enables startups to achieve a fresh and innovative solutions.

Successful startups are good at listening. They know what they really need is to understand user behavior, expectations and wishes.

If you meet your users and listen- you can get insights and ideas you will never see on managers’ dashboards or get from a sales or support representative who talked to them.

In October 2007, The founders of Airbnb eager to make extra money, they noticed that local hotels were booked up because of a conference. So they pumped up some inflatable mattresses and listed their place online as an “air bed and breakfast.” It was quirky and it worked. That little act of creativity became Airbnb.

At the beginning AirBNB niche was to help people rent out spare bedrooms or couches. They considered themselves as “eBay of space”- like when you sell things you don’t use on eBay, you could rent spaces you don’t use on AirBNB. In order to understand their users better they went to NY and rented places on AirBNB and talked to users-Then they had a conversation that changed the direction of their company.

One of their users was Barry Manilow’s drummer and he said that he didn’t want to just list his bedrooms, he wanted to list his entire apartment. Because he goes on tour with Barry for a week at a time. Then they thought “why don’t we add the option to rent out your entire home, your entire apartment on our website?” It turned out to be a huge portion of their business today, and they may never have discovered it unless they listened to a user.

If I would have to choose only one tip to startups I’d say- Listen carefully to your users and learn from them.

In summary, there’s always a choice of what to focus on both in life and in UX, with Tamar, we’ve chosen to focus on her strengths and today she loves dancing and making her friends laugh.